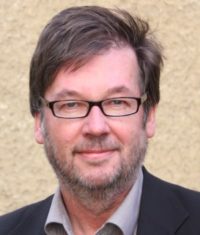 Erik works on multiple foresight projects in Norway, and across Europe. He has a PhD in Futures Studies from the Free University of Berlin. Erik is a Co-Editor-in-Chief for the European Journal for Futures Research.

Erik is a guest researcher at the Institut Futur in Free University of Berlin, Germany, and a policy advisor to the Minister of Education and Research in Norway. He has a background as a guest lecturer at the University in Stavanger on Foresight Management issues, and have served as a key note speaker on conferences in Norway and abroad. In 2012 he was the founder of and become the role as Co-Editor-in-Chief of the European Journal of Futures Research EJFR.

On December 4th, 2020, he gave a talk at the “I CONGRESO INTERNACIONAL PLAN-FUTURO 2020: “PARADIGMA PARA UNA NUEVA ERA” about Cities of the Future.

“New Paradigm: CITIES OF THE FUTURE. Sustainability and Futures: How Eco-smart Cities urge us to move beyond “The Natural” and “The Artificial”.

In this talk. Dr. Øverland, pointed at some aspects within urban policy development and urban planning that are seldom discussed. Within urban environments we are witnessing an integration of emerging synergetic technologies in urban developments, which also contribute to phenomenons like urban and vertical farming, the creation of new materials and the application of ecologic thinking in planning activities on a scale we have never seen before. We may even go so far that we could talk about “constructing natures”, “new natures” and “creating natural environment within urban surroundings”. These “new natures” are not given to us, but must be considered as an act of human efforts. We are creating the nature that earlier appeared as given to us, as created by a God or through natural selection without the influence of humankind. The conventional concept of “nature” therefore represents something absolutely different than “The Artificial”. On this background Dr. Øverland’s main thesis is that these developments in the long run will challenge our ability to differentiate between what we consider as “natural” (in a conventional way) and “artificial”. We therefore have to rethink the relationship between the two. Some questions asked were:

What does it really mean when urban environments create what we may call “constructed natures”? (concept of nature…)

How will the emergence of trans-humanism and the digitalization of body and soul influence us as human beings? (concept of human beings…)

When “nature” is constructed, is it then appropriate to talk about a nature that is given, clean, representing an equilibrium and an ecological harmony, as a reference point to all kinds of artificialities and manipulation?

The premises for his talk was to answer “no” to the last question. This may also have consequences for both the futures field as such. What should be the fundamental questions for  futurists in the next decades? What could replace “sustainability” as a baseline for identity and world view in today’s long term futures?

Last, but not least, he introduced a concept he calls “universal perspectivism”, before he ended his talk with the listing of some “guidelines” for the futures, “The Third Manifest of Futurism”.

You can watch the video of his presentation here.

Disclaimer: The views and opinions expressed in his presentation are those of Erik and do not necessarily reflect the official policy or position of the Federation.

He has published several books and scientific articles about futures studies. Erik was the Project Manager of Norway 2030 by the Norwegian Government (1998-2001) and has conducted futures studies for agencies and business enterprises both in Norway and abroad. His most recent publication is a textbook at the university level: “CARPE FUTURUM. How to manage the future”, Cappelen Publishing 2010. Among Erik’s scientific interests are educational science, futures research, theory of science and worklife research. The main focus of Institut Futur is on three core areas: 1) Futures Studies based on Social Science, 2) transformation in the education system, with a special focus on Education for Sustainable Development (ESD) and 3) research on the transfer of knowledge and innovation.