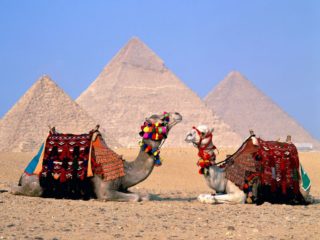 The Mexico learning lab was developed and implemented by WFSF Vice-President for the Iberam Region, Ph.D. Guillermina Baena Paz and the young futurist Alethia Berenice Montero. The project was set up in a partnership with the Direction Ejecutiva de Trabajo del System Penitenciario del Distrito Federal in Mexico City. Nine women held in prison and likely to return to their communities the following year, participated in the project. The women participated in 50 hours of workshops from March till June 2015. 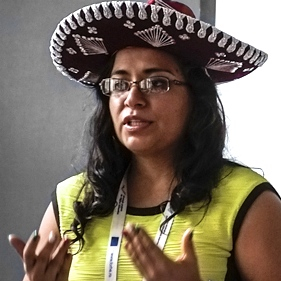 The approach chosen for this workshop was “Teatro del devinir” or “Forward theatre”, a performative futures strand. Alethia studied psychology and works as an artist and futurist in the domain of “Forward Theater”, working with performative futures. She is currently studying a Masters in Humanist Body Psychotherapy. She works as a Psychofuturartist and has developed the Psychoprospective Theory along with the Colombian psychologist Martha Jaramillo. She is the pioneer of Forward Theatre in Latin America, and a member of the WFSF Youth Council. Photo: Alethia Berenice Montero, Mexico, speaking at the 21st WFSF World Conference, Bucharest. © 2013 Bram Goots with permission.

The objective of the learning lab was to equip the women about to be released into society with tools for reintegration and to prepare them for the challenging future possibilities they might have to deal with upon their return to their communities. This way the course sought to add a self transformative model to the traditional social reintegration model.

The learning lab focused exclusively on personal futures but also included some attention for possible changes in the communities and environments the women will return to. In its work with models of possibility for their reintegration, the women are stimulated to break with traditional dominant paradigms, to change their attitudes, to think further ahead than the immediate future and to develop emotional, spiritual, corporal and intellectual intelligence. 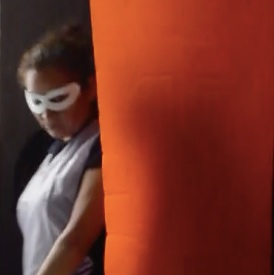 Forward Theater is an existential manner of learning about possible futures. The process entails the development of three distinct storylines that fall into the categories of utopia, dystopia, and eutopia. Participants present stories from these categories on stage with a time limit. With this technique the participants produce their own preview of some of the possibilities they may face in the coming time.

In the exercises and performance, subjective parameters are used. Emotions, self-esteem, believes, spiritual outlooks and collaborative work are central to the activity. This approach is centred on the human subject. The starting point is that the women in prison are hurt or unwell and that to handle models of possibility concerning their reintegration well, they need to “heal inside”. The learning lab helps them heal “their self” and extend this to the other participants also.

Using the Forward Theatre method the participants presented possible futures scenarios. “It was a space to cry out what had remained silent, to laugh the laughters that were hidden and speak what was clogged.” Changes in mental structures are among the primary goals of the project and the theatrical method is geared specifically at this.

Participants are (literally) made to face their fears concerning the futures and take on the negative. They can feel angry or sad, frustrated or lost, insecure or destructive. Giving space to these feelings as well as positive emotions, is intended to take away self-pitty. The women learn to “dare to change”, to avoid repeating earlier mistakes, not to live in the past and not to surrender after failure.

Over the course of the workshops, the women did 53 exercises in cognitive, emotional corporal and spiritual areas of which they said that they found transformational.

No major modifications were needed. This project was implemented as designed, although the number of participants and the location for the workshops was slightly revised after the project design was finished.

The final report and other documents are available at this link.